What are email bots and why do they matter?

Why do bots affect email activity?

What did Sugar do to address the issue of email bot clicks?

Did you apply the bot click remediation to previous campaigns?

Can I see my bot clicks?

Do I need to update my custom reports?

Will these new human only link-clicks be synced to my CRM?

What are email bots and why do they matter?

Bots, or programs built to do automated tasks, encompass an enormous amount of online activity and, by some estimates, are responsible for more than half of total web traffic. There are many useful actions that bots take on our behalf, but they can also be used for malicious purposes such as impersonating humans for click-fraud and carrying out distributed denial-of-service (DDoS) attacks.

Marketing automation providers, like Sugar Market, had been largely unscathed by bot activity, but over the past year we’ve noticed a spike in email click metrics and unusual data associated with them, such as a high number of link clicks immediately when the email is delivered (and sometimes even before the email registers as being opened), or a high number of clicks coming from a singular account or domain.

The implications of bot activity can be significant—one being a lack of visibility into the accuracy of your marketing metrics. Not only have you been possibly reporting higher click-through metrics, but there is a larger impact on your scoring, nurture campaigns (automation being triggered based on false events) and reporting.

Why do bots affect email activity?

Bot activity in email is typically security software designed to identify and prevent links to malware or phishing attacks. The security software will open the email and engage with the corresponding links, following them through the redirect and examining it for signs of malicious intent.

These security filters are more common in industries that collect highly personal information, such as healthcare or finance, making the impact of bot activity more significant in B2B marketing compared to B2C marketing.

What did Sugar do to address the issue of email bot clicks?

We improved our bot click detection that identifies and separates legitimate email link-click activity from that generated by bots. This change is being made so that as marketers, you have more clarity and insight into your click-through metrics.

Our main objective is to help you increase engagement and boost quality over quantity when using Sugar Market, and by filtering out this bot activity you’ll have better insight into which marketing programs are most effective, ultimately helping you improve campaign ROI and drive growth for your business.

Did you apply the bot click remediation to previous campaigns?

On January 13th at 10:30 am EST we deployed the bot click remediation to track bot versus human link-clicks. No change was visible to customers.

On January 30th, we are releasing the full feature with an update to the UI so the change will now be visible to customers.

As a result, your emails after January 13, 2020 will very likely have lower email clicks than you’re used to seeing, but your down funnel metrics and conversion rates will increase as a result.

We did not and do not plan to alter historical campaign data, so comparing metrics month over month will be nuanced a bit, but we believe rolling out this change globally will save time and help better identify what leads are worth pursuing. The goal is to boost quality over quantity, and in the long run, filtering out this bot activity will help zero in on which marketing programs are most effective and improve campaign ROI.

Can I see my bot clicks?

Yes, the Standard Campaign Statistics report has been updated to separate out human clicks and bot clicks as two separate fields. 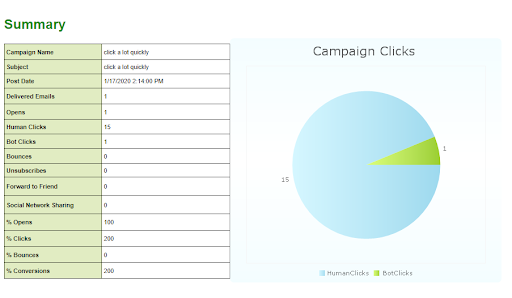 You can also view bot clicks by creating a custom report using the CampaignerLinkClick table and adding a filter for the Human Click Column. The value ‘True’ means it’s a human click. ‘False’ means it’s been identified as a bot.

Reports on the CampaignerActual table will only show human clicks automatically. No changes or filters have to be made to these reports to filter out bot clicks.

Do I need to update my custom reports?

Some reports may need to be updated based on the type of report. We have left some flexibility in the reporting to allow for those customers that want to see both human clicks and bot clicks.

Any custom report created in our reports module that references the CampaignerLinkClick table will need a report filter added to show only human clicks. Follow the instructions below to do this:

Any report that uses Standard Views will be updated automatically to filter out bot clicks.

Will these new human only link-clicks be synced to my CRM?

If your CRM connector is set up to sync email link clicks, then we have automatically update the sync to send only human clicks moving forward.

If you have any questions or concerns, please contact your Sugar Partner, if applicable, or Sugar Support by emailing support@sugarcrm.com or creating a ticket via the Support Portal. We hope you’ll soon see the benefits of this change with improved quality conversions and ROI.